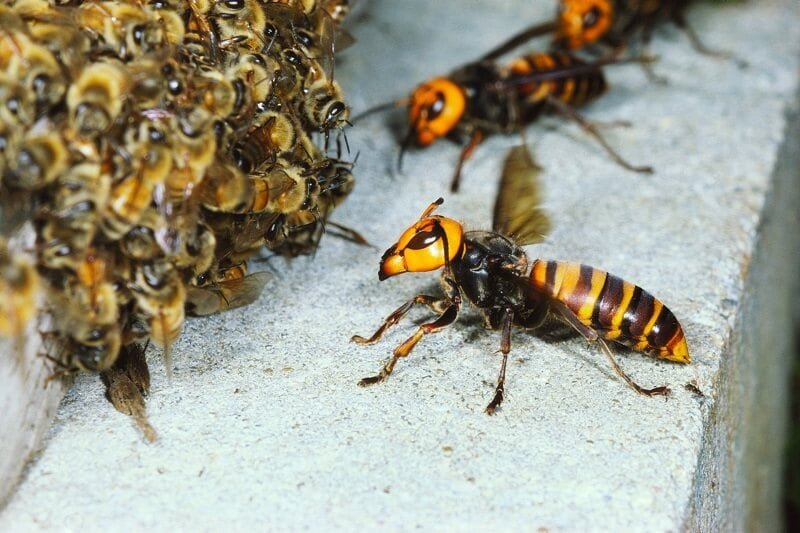 Almost every one of us has heard of hornets. We are all too familiar with how a hornet sting is very painful and can cause extreme discomfort. All of us probably have experienced or at least know someone who has been stung by a hornet. There are many different types of hornets. But one of the most intriguing is the murder hornet. What are murder hornets? Are they coming to Oregon? And how do organic pest control services help deal with murder hornets?

What are murder hornets?

The Asian Giant hornet is considered the largest hornet in the world. Recently, there have been many reports, pictures, and videos of these giant hornets in America and how they have viciously attacked hives of honey bees.

The Asian Giant Hornet, or Vespa mandarinia in Latin, earned the term ‘murder hornet’ as it crawls into the hives of honey bees and rips their heads, leaving a trail of dead honey bees.

Several US government agencies and many beekeepers have taken certain measures to counter murder hornets as they may interfere with commercial beekeeping. One of these methods is organic pest control treatments. These supervillain hornets have been seen in Washington State and Vancouver Island.

Being the largest hornet in the world, a female worker of the Vespa mandarinia can grow to up to an inch and a half or about four centimeters. This insect has a very large and very powerful mouth giving it the ability to bite the head off of its prey. Regardless of their size, they are still manageable with the right organic pest control measures.

Murder hornets are usually lone hunters. However, during the late summer season into early fall, they band together to form an army and conduct several mass attacks on the nests of other insects, especially honey bees. This behavior of the murder hornets has a name. It is known as the phase of slaughter and occupation. Even in groups or with lone murder hornets, organic pest control can help control or eradicate these vicious beasts.

Every year, beekeepers from the US supply several billions of honey bees to help in the pollination of 90 crops at least. With the arrival of this murderous type of hornet, these beekeepers are worried that it could worsen the very problematic situation of pollinator populations. They should consider organic pest control for additional defenses.

As the name suggests, the Asian Giant Hornet is native to Asia. It lives in Japan up to Russia and then down to Myanmar and Thailand. It was first confirmed in the US when a dead specimen was found in Washington in December.

These insects, however, have already been spotted previously in the nearby Vancouver Island in the late summer until the fall of the year 2019. As of today, no one knows yet whether the murder hornet has established several nests in the North American region or if it will soon. If these murderous insects do, it could mean a lot of trouble for the local beekeepers and everyone else affected. But with organic pest control methods available, there might still be hope.

How do murder hornets hunt?

They prefer social insects since these insects usually come in groups. One of their staple and main diet are honey bees. When a worker murder hornet sees a potential food source such as a honeybee nest, it places a pheromone mark on it. Other worker murder hornets recognize the scent and will then respond. Fortunately, organic pest control can take care of them.

The honey bees vibrate all of their flight muscles very hard, and this raises the temperature to about 45.9 degrees Celsius. Inside the buzzing ball, the level of carbon dioxide goes up as well. The bees can handle the harsh conditions of the ball, but the hornet cannot.

Eventually, the hornet will die. Even with these defenses, it is still important for beekeepers to employ other defensive ways, such as organic pest control methods, to ensure the safety of the honey bees.

However, honey bees can only do this defensive maneuver when there are significantly more honey bees than murder hornets. When a hornet places the pheromone mark, and several other murder hornets respond enough to overwhelm a honey bees’ nest, then the bees will not be able to counter them, and they will be slaughtered by the murder hornet. This is why for maximum safety purposes, organic pest control methods must be employed.

Once the murder hornet group is done with the killing, they are then left with a food bank filled with immature bees that are still trapped in their tiny waxen cells. These tiny bees are rich in protein and are very nutritious for the young larva of the murder hornets.

They do not react to the pheromone markers of the hornets, and they do not create buzzing bee balls to counter the hornets. This means that even a small group of hornets can destroy a single honeybee nest. This is all the more reason why beekeepers should consider outsourcing organic pest control services to deal with these insects.

It is not as though beekeepers in Oregon and other parts of the United States are entirely helpless in case the murder hornets do come into their locale. Certain measures and defensive methods can be employed. One such example is by installing a form of entrance traps to cover the doorways of the hive or even the entire hive itself.

They will still return to the hive when it senses danger. With entrance traps installed, beekeepers can significantly reduce the damages done by the murder hornets. For more protection, beekeepers can hire the services of an organic pest control expert such as Ant & Garden Pest Control in Beaverton, Oregon.

How the murder hornets will affect the US and Oregon

Murder hornets have already been spotted in Washington. It is still unclear, however, if they have already invaded it fully and if their number in Washington is already enough to raise concern. Still, the US should take certain steps to counter this. Ant & Garden Organic Pest Control in Beaverton offers organic pest control measures that only target specific pests and preserves the beneficial insect population.

In the unfortunate possibility that the murder hornets will invade the US, including Oregon, it will be one of the major adversaries to the already struggling honeybee population. This will increase the need for organic pest control. Not only do the European honey bees in the US have no buzzing bee ball defense mechanism, but they also already have several other threats to their population.

Honey bees in Oregon and other parts of the United States face different problems. One of them is the parasites called varroa mites that suck out an internal organ of the honeybee and kills it in the process. Apart from that, there are also about 20 other viruses and other diseases. Pesticides from the food they eat can also kill them.

Ever since the year 2012, beekeepers have been struggling with the annual losses of honey bees that they have suffered. The losses amount to around 29 – 45 percent. This is an alarming statistic. If the murder hornets should come to Oregon and the United States, we can be certain that this statistic will rise even higher. This statistic may likely go down if many beekeepers try organic pest control measures.

The murder hornet is also a warning for something even more threatening to the honey bees. In Asia where the murder hornet originated, there is another predator of honey bees that beekeepers in Asia are terrified of, and that is the Tropilaelaps mite.

This predator lives in the hive and kills a number of the bee’s larvae, and deforms several of the adults. This mite is considered more terrifying than the varroa mites and the murder hornets as they are very hard to detect and eliminate.

So far, there have been seven total murder hornets found in Whatcom County. The state has already funded traps to control the spread of these insects. There have been more efforts in setting up more of these traps. However, there is a bit of a challenge. Scientists still lack the specific pheromone to lure these murder hornets.

As of now, they have only been using cooking rice wine and orange juice as their primary lure. To some extent, it attracts hornets, but it also attracts other insects such as moths, flies, wasps, among many others. With continued effort and cooperation, perhaps scientists will be able to formulate a specific pheromone-lure to counter these murder hornets. These scientists may also develop other organic pest control means as another alternative.

As of whether these hornets will reach Oregon soon, it is still highly dependent on how effective Washington will deal with the situation. Regardless, Oregon should be prepared with organic pest control methods just in case. Companies like Ant & Garden Organic Pest Control is one of the best in Oregon, and they should be able to deal with these murder hornets should they invade specific local beekeepers.

The US government and the beekeepers all want the same thing—to get rid of these murder hornets. They are a bit alarmed, and they want to do so as quickly as possible because once these insects get entrenched, it will be harder for humans to eradicate them. Furthermore, no human wants to get in contact with these murder hornets as well.

Compared to a honey bee, the murder hornet’s sting has lesser venom when compared milligram to milligram. However, this does not mean that it is less painful. On the contrary, since murder hornets are significantly bigger than honey bees, they can also deal a lot more venom, and on top of that, a murder hornet can sting more than once. This is why no one wants to deal with murder hornets, especially when they have already entrenched.

People who have experienced being stung by a murder hornet describe the experience as like being pricked by a very hot metallic pin. Of course, almost all beekeepers and people who deal with bees have protective clothing. However, since murder hornets are larger than honey bees, it also makes sense that their stingers are relatively longer as well. Their stingers are long enough to pierce the standard protective equipment of most beekeepers.

Although a string of murder hornets is very painful and can cause extreme discomfort, it is not potent enough to be considered very dangerous. However, should a human being get bitten several times by multiple murder hornets, then that is a different story.

In a recent article published New York Times, there are about 50 people in Japan that die every year from the stings of a murder hornet. This is another reason why the spread of these insects must be controlled, and they must be eradicated preferably before they have been entrenched.

Murder hornets usually have their nests situated underground. Finding the nests of these insects and destroying them is key to eradicate them. There are several ways to do this. However, because of the risks the endeavor entails, it is highly recommended that you hire professionals to deal with these murder hornets. Luckily, Ant &Garden Organic Pest Control has all the right equipment and professionals who are well-trained to help you eradicate these insects.

Organic pest control works best against murder hornets as they provide environment-friendly methods to deal with these vicious killers. Natural pest treatments offered by Ant & Garden Organic Pest Control in Beaverton, Oregon is one of the best when it comes to combatting these insects. It’s always best to come prepared and equipped with the right pest control solutions to tackle the looming threat.