The majority of cannabis growers cultivate their crops in soil so fungus gnats are marijuana pests that aren’t entirely new to them, especially among those who maintain indoor grow spaces. The chances of running into a fungus gnat infestation outdoors may be pretty slim, but it is a common issue among indoor growers. And there’s one primary reason why—moisture.

The majority of cannabis growers cultivate their crops in soil so fungus gnats are marijuana pests that aren’t entirely new to them, especially among those who maintain indoor grow spaces. The chances of running into a fungus gnat infestation outdoors may be pretty slim, but it is a common issue among indoor growers. And there’s one primary reason why—moisture.

Fungus gnat larvae need wet conditions to thrive. It isn’t uncommon for indoor growers to overwater their cannabis plants or maintain incorrect humidity levels inside grow rooms and wet soil is the perfect home for fungus and decaying organic matter. After fungus has grown or overwatered matter begins to decay in the topsoil, fungus gnat lays their eggs in the top layer of moist soil.

What are fungus gnats?

Fungus gnats are small flies that infest soil, potting mix and other container media. They also thrive in other sources of organic decomposition. Their larvae primarily feed on fungi and organic matter in the soil, but will also attack plants when their primary food source runs out. In the case of cannabis, fungus gnats can eat root hairs or chew directly on the roots.

Adult fungus gnats measure about 2 mm and are black, gray or dark brown. They have long legs and can pretty much look like fruit flies at first glance. The best way to tell is by size and color, as fruit flies are slightly bigger and typically yellow, orange or light brown in color. 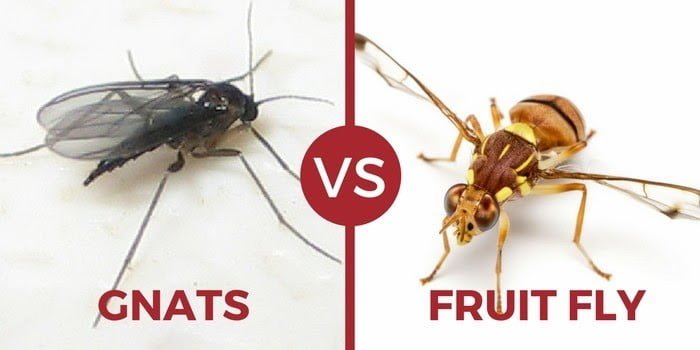 Female fungus gnats can lay up to 200 eggs each week. These eggs hatch into larvae that look like tiny maggots which only live in the top 2-3 inches of soil. Some eggs may also be found in the lower sections of cannabis plants, usually along the stems and leaves. Larvae or maggots have black heads and clear bodies, but are impossible to see with the naked eye because they are too small. Still, both maggots and adult fungus gnats are equally harmful bugs on marijuana plants. Besides feeding on cannabis roots, the fecal matter fungus gnats leave behind can cause soil to suck up more moisture which can lead to increased pest and mold problems.

How to spot fungus gnats on cannabis

Among the best foolproof ways to check for fungus gnats is using yellow sticky cards which you can purchase at any gardening shop in your neighborhood. Don’t go for any other color because gnats are particularly attracted to yellow. I suggest you place a couple of cards in the soil next to your cannabis plants. Just leave them there and observe if they’re covered with gnats after a couple of days. If they are, then you probably have an infestation. 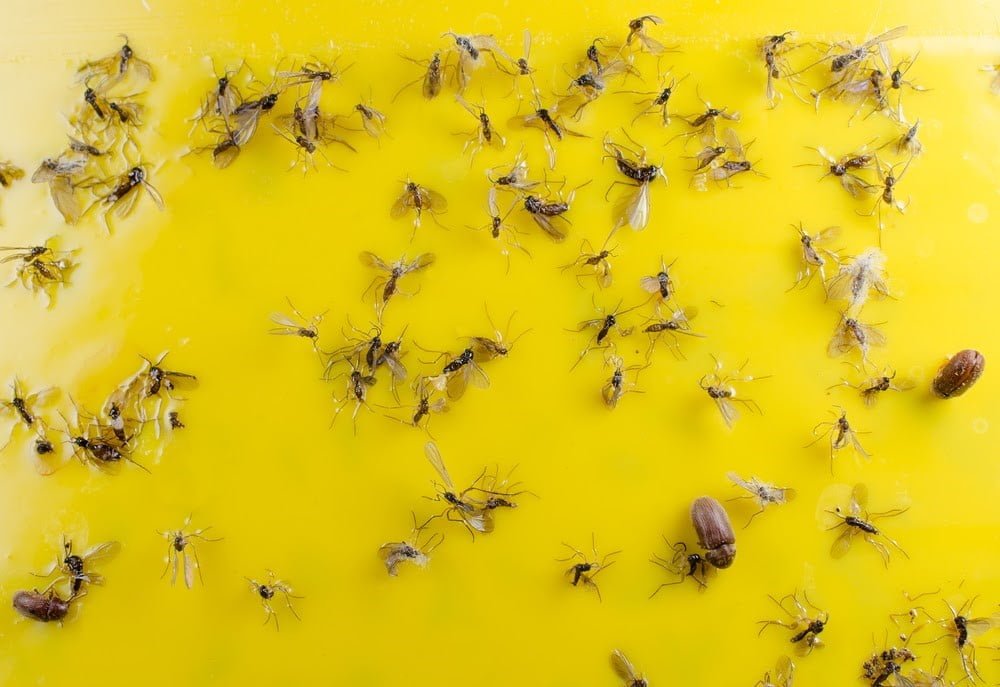 If you’re pressed for time, however, and have this strong gut feeling that fungus gnats are beginning to devour your cannabis babies, a quicker way to find out is to use something that’s already in your kitchen—a potato. Slice a potato into wedges and stick them into the soil or potting mixture. Check back after 4 to 8 hours and if you see maggots feeding on the potato, then you most likely have a fungus gnat infestation. 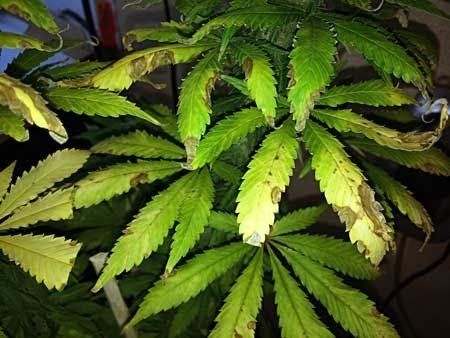 Cannabis plants can die from a fungus gnat problem, particularly if your plants are quite young or if the infestation is so bad. There are telltale signs, however, that can prevent this from happening. You may notice slower growth or symptoms of nutrient deficiencies that are without apparent cause. Also, the leaves tend to discolor and if an infestation comes at a terrible time right before flowering, this can have a huge negative effect on your yield. Root rot may also result from a fungus gnat infestation.

How to get rid of fungus gnats

Time is of essence so you need to address a fungus gnat infestation the moment you detect these nasty cannabis pests in your grow space. While it may be easy to trap adult fungus gnats using yellow sticky cards, it’s the larvae that actually needs more of your attention since they’re a bit harder to deal with.

First things first—remember that fungus gnats thrive in moist or wet soil. So, you need to intervene and allow the top few layers of your soil to dry out because that’s where most of the larvae thrive. This may require a break in your watering schedule for a few days but there’s really nothing to worry about. Holding back water for a short period won’t have lasting negative effects on your cannabis plants. Using an oscillating fan can help speed up the drying process; at the same time, the gentle breeze will prevent adult fungus gnats from flying around your cannabis plants and laying their eggs.

Next, you can prepare a solution of one part 3% hydrogen peroxide mixed with four parts water and use this in place of your regular water feeding schedule. The solution oxygenates the soil and has a healing effect on cannabis while keeping gnats away. These “quick-fix” approaches should put your fungus gnat problem under control until you can hire the services of a professional organic pest control expert like Ryan at Ant & Garden Pest Control in Beaverton Oregon if you operate a cannabis grow in the NW Oregon area. I recommend you don’t delay this any further, as early treatment and control is essential at this point.

To control and eliminate a fungus gnat issue in cannabis grows, I normally use BTi (Bacillus Thuringiensis), a bacteria contained in pest treatments that effectively kills the fungus gnat larvae. It works by preventing the larvae from eating and, in effect, kills them off effectively. This also will have no harmful side effects to you or your plants.

Depending on the level of your infestation, I may also recommend introducing some beneficial nematodes and insects such as rove beetles to chow down on fungus gnats at whatever growth stage they are in. These predatory bugs and nematodes will feed on the larvae in the soil and end the life cycle of fungus gnats in your grow room.

At Ant & Garden Pest Control in Beaverton, Oregon, I only use top-of-the-line equipment and safe, eco-friendly products combined with the latest techniques to ensure we get rid of fungus gnats and all unwanted marijuana bugs in cannabis plants. Give me a call today to discuss how I can help provide you with an effective and long-lasting organic pest control treatment plan specifically designed for your cannabis grow space!

Emma BakerGreat company! I was about to kill all my plants and shut down because of frustration with two-spotted spider mites and broad mites. So happy Ryan verified this through a Dino lite microscope at 220 x magnification. Extremely satisfied in his service, my mites died, no eggs spared.
Read More

Paul EvansAnt & Garden Pest Control deserves 10 stars saved me from bankruptcy. I had root aphids in my indoor garden there’s nobody that knows how to kill them and has posted it on the internet. Ryan has dealt with them before and knew exactly which olcc approved products to buy and how to prevent reinfestation. I just harvested my first pest free crop in years! I am now going with his maintenance sprays 1 time a week Ryan has all the best lab grade equipment and knowledge. Easier to let him focus on my pests my time can be spent growing bumper crops of exceptional quality. This harvest I yielded 50% more than normal and sold everything I grew for 30% more than last time. Not only are my pests gone but Ryan’s service made me money.
Read More

Michael WrightThe commercial-grade soil baggage compost I used for my plants has root aphids. I had to reach out to Ryan of Ant & Garden Pest Control for assistance. The last three months have been quite pleasing as the destructive aphids were gone. Ryan was reliable, providing a constant level of quality with strong results. You can’t beat the peace of mind he offers. I had my first harvest smoothly with his maintenance spraying. We yielded over 2 grams a watt, nearly double our personal best.
Read More

With Oregon’s leading pest
professional on your team, you’ll never have to spray your plants again or worry about lab testing.

We offer Organic Certification and are fully insured.

We are proudly Google Guaranteed – if your bugs are not eradicated you get your money back!