Root aphids can be a pain in the neck for cannabis growers in the NW Oregon area. These pervasive and obnoxious pests destroy cannabis crops by sucking on the roots and leaving an enzyme that causes lesions that are not able to heal. As a result, nutrients from the roots are leached, leaves wilt, and overall plant growth is stunted.

Root Aphids: Why They Can Be the Greatest Threat to Cannabis

If you have a cannabis grow room and suddenly notice your plants looking a bit off and undernourished, the first thing you would do is check for all the common quick fixes. So you make sure they’re adequately watered and receiving the right nutrients according to your feeding schedule. You’ll also ascertain that pH is in the ideal range and there are no visible signs of marijuana bugs in the stems and leaves of your plants. Finally, you take a look at the roots and your worst fear is confirmed—you have root aphid infestation.

Root aphids can be a pain in the neck for cannabis growers in the NW Oregon area. These pervasive and obnoxious pests destroy cannabis crops by sucking on the roots and leaving an enzyme that causes lesions that are not able to heal. As a result, nutrients from the roots are leached, leaves wilt, and overall plant growth is stunted.

In order to identify, treat and prevent a root aphid infestation, you must first get to know about them better.

What are root aphids?

Root aphids have been around for more than a century. They’re among the worst enemies of commercial crop growers, first decimating vineyards in France and almost destroying the wine industry in a scourge known as the Great French Wine Blight in the mid 1800s.

Root aphids belong to the phylloxera family of bugs and are native to the eastern and southeastern United States. First discovered in California in the 1850s, they found their way to French vineyards a decade later when American grapevines were exported to France to help fight powdery mildew. This led to two-thirds of the destruction of Vitis vinifera vineyards in Europe by 1900.

Part of what makes root aphids so prevalent is their prolific life cycle. As soil temperature rises in the spring, nymphs begin to feed on root sap and mature into adults in just two to three weeks. These spring and summer feeding adults are strictly females that can reproduce without male fertilization. A single female can produce 100-150 eggs over a period of six weeks and new nymphs invade other root areas to feed and cause gall formations. As they mature, they begin producing the next generation of eggs. The cycle goes on and between five to nine overlapping generations of root aphids can take place in a single growing season. Newly hatched nymphs in September and October usually hibernate for the winter.

With such a diverse and fertile reproductive cycle, it’s no wonder why both growers and hobbyists have such a difficult time eradicating these cannabis pests. Now let’s take a look at how to find out if root aphids are attacking your cannabis plants.

How to spot root aphids in cannabis plants

Now that you’re equipped with information about root aphids, you need to know the telltale signs of a root aphid infestation in your cannabis grow space. It wouldn’t be wise to immediately dig up a plant to inspect its roots—that’s why it’s important to first rule out other possible causes that are making your plants look unhealthy. 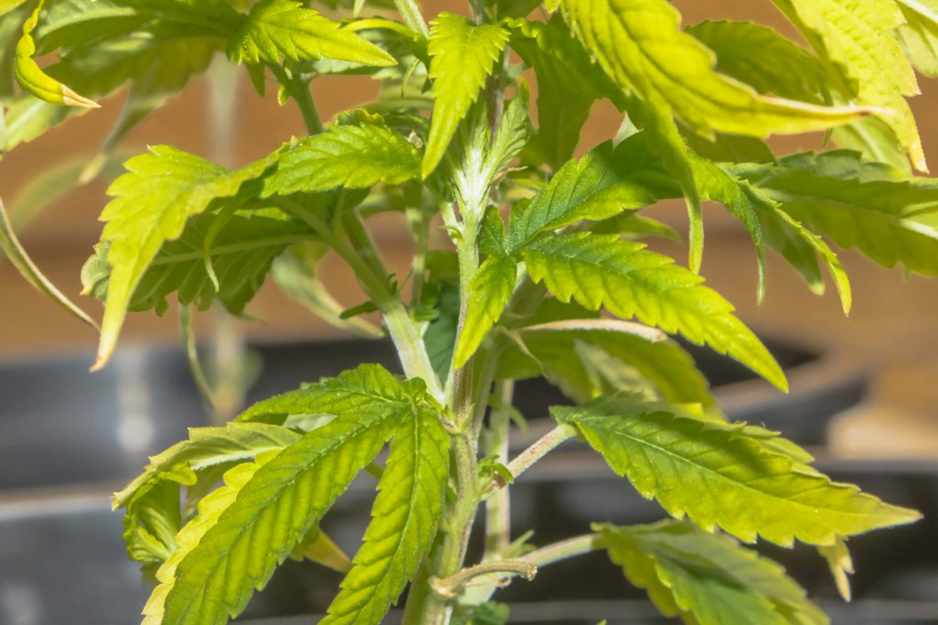 Cannabis plants afflicted with root aphids will look undernourished and their growth will be stunted. If they’re flowering, the flowers will be smaller than usual. The leaves exhibit signs similar to iron and magnesium deficiencies, so they’ll turn yellow because the root aphids are sucking out these nutrients from the roots.

After you’ve ruled out other probable causes in plain sight, it’s time to get to the bottom of things—examining the roots. Cannabis roots that are afflicted with root aphids will turn yellow, swollen and hard. You’ll need to keep your guard up at this time because damaged plants will also become susceptible to other issues like root rot and fungus.

Root aphids are somewhat difficult to identify and often confused with other marijuana pests such as fungus gnats. These pear-shaped little nasties measure about 1 mm and range in color from white, yellow, orange, brown, and green. They have the ability to camouflage with particular roots they feed off, so in the case of cannabis you’ll find white, tan, brown or orange root aphids.

Root aphids begin to resemble fungus gnats when they start to grow wings. If you do get confused with the two, keep in mind that root aphids have shorter legs and are chunkier than the latter. Their wings are also longer and more slender. In contrast, fungus gnats have slimmer bodies, longer legs and rounder wings.

As the old saying goes, “Prevention is better than cure.” This is the ideal scenario if you operate a cannabis grow room because root aphids are so difficult to get rid of. So it’s best never to have them to begin with. Outdoor growers don’t have this advantage because root aphids could be thriving on plants along the perimeter of their grow space. But with an indoor grow room, you can apply extra measures to seal your grow space completely and keep it clean. Regular sterilization is vital since root aphids can lay their eggs in walls and remain dormant during the winter.

You can also be more stringent when sourcing out soil and grow medium so you can ensure you don’t get material that has been infected with root aphids. Make sure not to overwater your cannabis plants, too, as root aphids seem to love extra moist soil. And if you do bring in fresh, new clones, be sure to give them a good root drench first with organic insecticides. Furthermore, if you have pets around, make sure they don’t get into your grow room as they can be unknowing carriers of these pesky little suckers.

But what if you already suspect a root aphid infestation in your cannabis grow space? Well, it’s time you get in touch with an organic pest control expert like Ryan at Ant & Garden Pest Control in Beaverton Oregon.

For decades, I’ve helped homeowners and commercial growers in Oregon treat, eliminate and control marijuana pests and diseases in their homes and grow spaces. When it comes to root aphids on your cannabis grow, I highly recommend catching these pests early on so I can keep their populations down and even eradicate them without injuring plant roots beyond repair.

I begin with a root drench using a citric acid-based pesticide which is organic, safe and non-toxic to humans but highly effective against root aphids. Depending on your infestation, I may also decide to apply organic foliar applications as a preventive measure. Then, I will use any or a combination of the following:

Root aphids are among the worst cannabis pests you can have in your grow space. They will not go away on their own so you should never ignore them and take action quickly. It’s best to have an expert like Ryan at Ant & Garden Pest Control eradicate root aphids but if you’re too far away for next-day service, you can start with BotaniGuard® 22WP and BTI, followed by the beneficial nematodes. Make sure you seal your pots so your future harvest won’t be ruined by these pests. Then, we can schedule an onsite assessment so I can come up with an effective long-term organic pest control plan so root aphids and other common cannabis pests and diseases won’t be a problem in your grow room!

Emma BakerGreat company! I was about to kill all my plants and shut down because of frustration with two-spotted spider mites and broad mites. So happy Ryan verified this through a Dino lite microscope at 220 x magnification. Extremely satisfied in his service, my mites died, no eggs spared.
Read More

Paul EvansAnt & Garden Pest Control deserves 10 stars saved me from bankruptcy. I had root aphids in my indoor garden there’s nobody that knows how to kill them and has posted it on the internet. Ryan has dealt with them before and knew exactly which olcc approved products to buy and how to prevent reinfestation. I just harvested my first pest free crop in years! I am now going with his maintenance sprays 1 time a week Ryan has all the best lab grade equipment and knowledge. Easier to let him focus on my pests my time can be spent growing bumper crops of exceptional quality. This harvest I yielded 50% more than normal and sold everything I grew for 30% more than last time. Not only are my pests gone but Ryan’s service made me money.
Read More

Michael WrightThe commercial-grade soil baggage compost I used for my plants has root aphids. I had to reach out to Ryan of Ant & Garden Pest Control for assistance. The last three months have been quite pleasing as the destructive aphids were gone. Ryan was reliable, providing a constant level of quality with strong results. You can’t beat the peace of mind he offers. I had my first harvest smoothly with his maintenance spraying. We yielded over 2 grams a watt, nearly double our personal best.
Read More

With Oregon’s leading pest
professional on your team, you’ll never have to spray your plants again or worry about lab testing.

We offer Organic Certification and are fully insured.

We are proudly Google Guaranteed – if your bugs are not eradicated you get your money back!