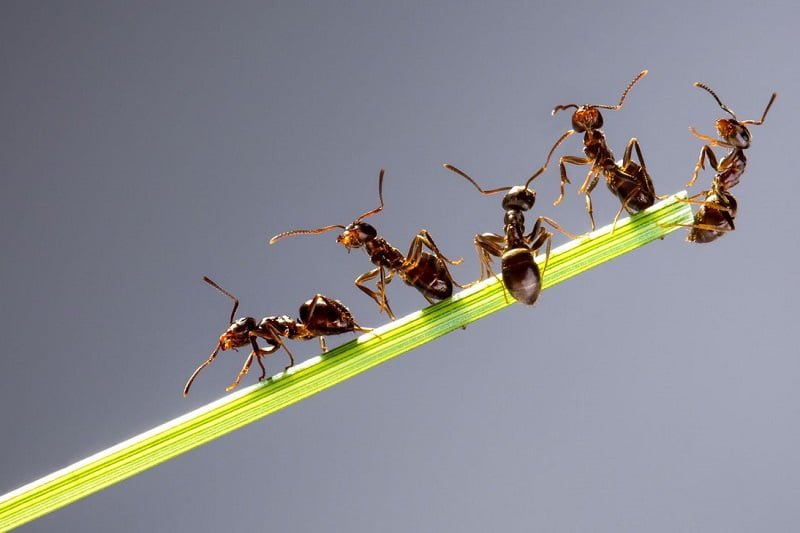 Ants are pretty common all around the world. In the United States, Oregon is no exception. While these measly creatures may appear harmless at first sight, Oregon ants can spell a great deal of trouble.

If you have an ant infestation in your home, you may suffer the consequences later on if you leave it untreated. What most people don’t know is eliminating ants is no measly task. More often than not, you may need help from a professional in severe cases.

Now, let’s take a closer look at each type of Oregon ant and what works to eliminate them from your home.

These are the most common ants present in Oregon. They are called odorous ants because they emit the scent of rotten coconut when you crush them. They are also known as sugar ants because they are attracted to sweet things such as sugar, jams, candies, honey, etc.

Odorous house ants are often found in your kitchen, where you store all your food. They can be pretty annoying since they can easily determine where your food is and will not hesitate to swarm if you leave it unattended. If you determined that there are odorous house ants in your house, make sure to keep your jam lids sealed tight and that all your other sweet foods are sealed tight.

Odorous house ants only measure about 2.4 to 3.3 millimeters. They come in either dark brown or black color. Although these ants can bite a human, their bite is not dangerous and will only cause a little discomfort.

These ants are very good opportunists and will invade your home and nest in the cracks of your walls, in your water pipes, and even in your carpets. As long as they have a stable source of food nearby, these ants can make a nest almost anywhere in your house. They can even nest outdoors.

As troublesome as these odorous house ants can be, it is not as though they cannot be taken care of. If their infestation is not severe, you can treat them by spraying pesticides.

If the odorous ants are around the perimeter as well, you can also spray around your house for extra protection and to eliminate stray ants. Regardless, this method is only effective if the ant infestation is not severe. For severe cases, it is advisable to contact a professional ant exterminator to help remove ant colonies.

Next on our list are ants originally from Brazil and Argentina. Most Argentine ants are found in the southeastern part of the United States, but increasing populations have recently been seen in Oregon.

Argentine ants measure about ¼ inch or even smaller. When you crush them, they let off a musty, stale smell. These Oregon ants prefer damp or moist environments and, as with all ants, a place where they can find a stable source of food. During the cold seasons, these ants tend to invade homes and take shelter in the cracks or other areas of your home.

Argentine ants are much more troublesome when compared to other ants. This is because of their extremely fast reproduction. Their nests can hold multiple queens, and as such, they can reproduce twice or even faster than other ants.

They are also more dangerous as they may carry different bacteria into your home. This is because Argentine ants are drawn to wastes and decaying stuff. The bacteria they get from these substances may latch on to your home if they have infested it.

These ants are invaders. They kill the other insects dwelling in your home, and over time, they will be able to create a network of different colonies with many queens. If left unattended, these ants can no longer be stopped without the help of professionals.

Ant bait is much more effective than pesticides. This is because they feed by transferring their food from one ant to another. However, if your house has an Argentine ant infestation, it may take more than a one-time cure to eliminate them. Calling a professional ant service such as Ant & Garden Organic Pest Control is highly recommended.

This is another common type of ant that can be found in Oregon. As the name suggests, pavements ants can be found on pavements scrambling around and looking for food. The ideal habitats for these insects are patios, sidewalks, and driveways. These ants usually live near human residences, wherein they can easily invade  houses in search of food.

Also known as concrete ants, they prefer sweet foods, dead insects, and other sources of protein. Leftover pet food is also part of their staple diet. The cracks in your walls, the gaps under the doors, and other holes in your house serve as entrances to them. However, what makes them stay near your house and may even encourage them to stay and make a permanent residence is if there is a stable food source for them in your residence.

Although these Oregon ants are usually docile and will not bite, they will do so if provoked. Their bite is not dangerous but may cause some discomfort in the area of the bite. Although pavement ants do not cause much of a problem, in great numbers, they can be somewhat problematic. They will not hesitate to swarm over leftover food and open food containers in your house.

Furthermore, eliminating them can be quite challenging as their nests are usually situated deep under the soil. They can dig under your gardens, and you will never know they are there. Tracking their trail from inside your house to outside may be your best bet on finding their nest. Their colony involves multiple queens and several workers. The queens stay inside the nest as with other ant types while the workers go out to forage food.

The best way to treat a pavement ant infestation is by the use of ant bait. This is because pesticides and insecticides are only effective when they come into contact with the ant. Although you may be able to eliminate the ants that you can see running around your house with your regular pesticide, the queens and the other workers that are hiding in the nest will remain safe. Since their nests are very hard to locate and reach, using ant bait to lure the worker ants into carrying poison into their nests is the most effective way to deal with them.

Thief ants can enter your home easily because they are one of the smallest ants, and they can crawl through even the smallest cracks in your home. They are very hard to deal with as they usually target greasy or oily foods or foods that are high in protein. Additionally, they can easily squeeze their way through even in well-packaged foods. This is why stopping them is very difficult.

If you want your food to be safe, it is always a good idea to fill a plate with water and then put another bowl into it to make a small island in the middle and then put your food into the bowl. This way, the thief ants will not be able to get to your food because of the water.

Although ant baits are not as effective on thief ants as with other ant species, using ant bait is still the most effective method compared to other baits in eliminating thief ants. There are several ways you can optimize your ant bait. Since thief ants prefer oily foods, mixing your ant bait with cooking oil, peanut butter, or any greasy food will be more effective in dealing with these ants.

When left unattended, pharaoh ants spread and reproduce very quickly. Furthermore, eliminating them can be a double-edged blade. When done improperly, pharaoh ants can split off and form into different colonies. This is why dealing with them must be done effectively and must completely incapacitate them, or else you will have more trouble dealing with them later on.

Since dealing with pharaoh ants is extremely difficult and there is a huge margin for error, it is best to let professionals handle them. Ant & Garden Organic Pest Control in Beaverton, Oregon can handle the job efficiently. We use organic means of eliminating these ants, so you can rest easy knowing that the products we use are safe for humans, pets and the environment as well.

This species of ant originally came from Southeast Asia. This ant species earned its name because of its erratic and unpredictable behavior. Crazy ants move in a very disorganized manner. Unlike other Oregon ants that form lines or trails, these ants just run crazy and swarm over a food source.

Furthermore, they have a very flexible diet which means they will eat almost any food. This can be very problematic since their main targets are households because of the food. When compared to other ant species, colonies of crazy ants are significantly larger.

The sheer number of ants in a single colony is enough to raise the concern of homeowners. These ants are also considered invasive species and will overwhelm and push out other insects near their vicinity. Crazy ants are hard to deal with because they can live both inside your house and outside. More than that, they also travel significantly larger distances to look for food.

This means that tracking their colony can be difficult. To deal with crazy ants, first secure your perimeter by spraying insecticide to kill foraging ants and to prevent them from entering your house. After which, you can spread ant bait and refill it now and then. If you can locate their nest, spray a strong insecticide to eliminate them.

Field ants are so-called because their main diet is seeds. They are also known as thatcher ants or harvester ants. Because of their red color, field ants are often mistaken as fire ants. Field ant nests are easy to find. They usually build big mounds near your garden or your lawn.

Despite having seeds as their main diet, they can prove to be problematic as well. If you accidentally damage their mound or accidentally provoke a field ant, they can sting like hell. Disturbing a mound may lead to multiple bites, and that can cause extreme discomfort. Be wary if you determined that your garden has a field ant mound.

Dealing with field ants can be difficult since you have to eliminate their queen as with other ant species. However, their queen is usually buried deep underground. Owners can use liquid insecticides that can penetrate the mound and go deep into the soil so that the queen will be killed. Other methods of eliminating them include ant baits.

However, as time goes by, more and more tunnels are created by the carpenter ants, and eventually, the wooden furniture will be brittle, and you may notice holes and cracks when it is too late. There are several ways to determine if your house is infested by carpenter ants. First is that you may notice some dust mounds on your floor. These are the residues left by carpenter ants as they are eating their way through the wood.

Another indicator is that late at night, when everything is silent, you can hear a slight scratching or sawing sound from your wooden objects. Normally, you will not be able to hear them, but when it is silent enough, you can.

These are the different ants in Oregon, and each ant has certain characteristics. In dealing with ant infestations, you must have at least a little knowledge of these ants. Some methods may be more effective than others. Regardless, it is always better to ask for professional ant services. In Oregon, Ant & Garden Organic Pest Control can help you with your ant infestation problems.