Ants are insects known to eat almost anything that they can get their mandibles on—from other insects to animal carcasses to seeds and human food. As long as there is food just lying around, ants will certainly show up eventually.

It helps to know the type of food that attracts ants to keep these nasty pests at bay.

Ants are known to be the most annoying of all house pests because they can ruin a lot of things including picnics, barbeques, and even your dinner. With the help of Ant & Garden Organic Pest Control, one of the top pest control specialists in Beaverton, we were able to make a list of the type of food that attracts ants the most.

Top Foods that Ants are Attracted To

Since the discovery of sugar, ants have totally fell in love with human food. Ants love almost all type of sweets including candies, juices, soda, syrup and anything else that is packed with sugar. Hence, if you want your property free from any ants, you should always dispose of your food properly and or keep them sealed in a tight container.

Just like humans, ants also need protein in their diet for them to remain as strong as they are right now. Because meat and eggs are rich in protein, they are some of the most favorite type of food that ants love. 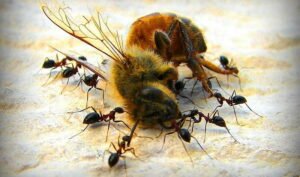 Ever seen a dead insect being carried off by an army of ants? Well, since insects are also rich in protein, ants would expend an enormous amount of effort just to get a dead insect back to their nest. Some ants though, would prefer to take the insect piece by piece, so you might notice that only some parts of the insect are left, usually the inedible parts.

Ants are known to be the little janitors of nature because they help clean the environment. By “cleaning the environment”, it means that they feed off on dead animals to help the decomposition process go a little faster. The lesser the amount of animal carcasses laying around, the cleaner the environment.

The reason why they would eat animal carcasses is because it is also another source of protein and since ants aren’t picky eaters, dead animals are a perfect food source for them.

Although not all ants feed on fungus, there are some species that just love this kind of food. One of the most well-known species of ants that feed on fungus is the leaf-cutter ant. Interestingly enough, they actually farm the fungus itself. The leaf-cutter ants would cut off some leaves or grass and carry it back to their colonies. They will then wait for the fungus to grow on the leaves or grass and then they feed on it.

Ants are omnivores; they don’t just feed on meat and insects. Seeds are abundant in some parts of the world, making them another one of the ant’s staple food. 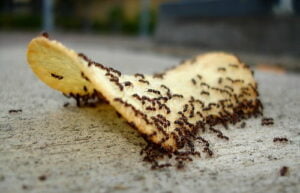 Another nutrient that ants need just like human is carbohydrates. Food that are rich in carbohydrates such as crackers, pasta, chips, pretzels, cereal, oats, breads or cooked rice is among the favorite of ants.

Again, just like humans, ants need carbohydrates as a source of their energy. The worker ants which are the busiest of all are the one who need to build up on loads of carbohydrates.

Ants also need fats in their diet and they would usually seek out greasy food and nuts in order for them to reach their required fat intake.

What Food Do Ants Hate?

Now that you know about what ants love to eat the most, what about the food that they simply despise? You can even use their hatred for these type of food as natural organic pest control for ants.

Here is the list of food that ants avoid because it is either poisonous for them or they just hate the pungent smell they emit.

The peels from citrus fruits are very toxic to ants because they contain an acidic oil called D-limonene which can pretty much kill them in contact. The smell released by citrus fruits can also mess up their trail so they usually avoid anything that smells like citrus fruits.

Lemons, oranges, grapefruit and other strong-smelling citrus fruits would make a great pest control for ants because they are practically harmless for humans and also quite affordable as well.

Some type of pepper contain a chemical known as capsaicin which acts as an irritant for ants, which will make them stay away. Some peppers also release a pungent smell that ants absolutely hate.

Cayenne pepper and black pepper are just some of the type of peppers that ants hate. Sprinkling some cayenne pepper on ant hills is a safe, cheap and effective way to kill off the ants. On the other hand, you can sprinkle some black pepper in areas where ants would get in, the smell produced by the black pepper will act as a barrier for them.

The peppermint plant would actually make a great ant repellent because your home won’t be just be ant-free but also minty fresh as well. You can even use some of the mint leaves in your cooking. The only known reason why ants avoid peppermint is because of the strong odor it releases.

Since ants love to eat almost any kind of food, it is of utmost importance that you store your food in a sealed container or dispose of them properly to prevent ants from infesting your home. Once your home is infested with ants, it would be truly hard to get rid of them completely. If you have a problem with ant infestations in Oregon, contact experts like Ant & Garden Organic Pest Control to eliminate the problem and guide you on how to keep ants at bay.