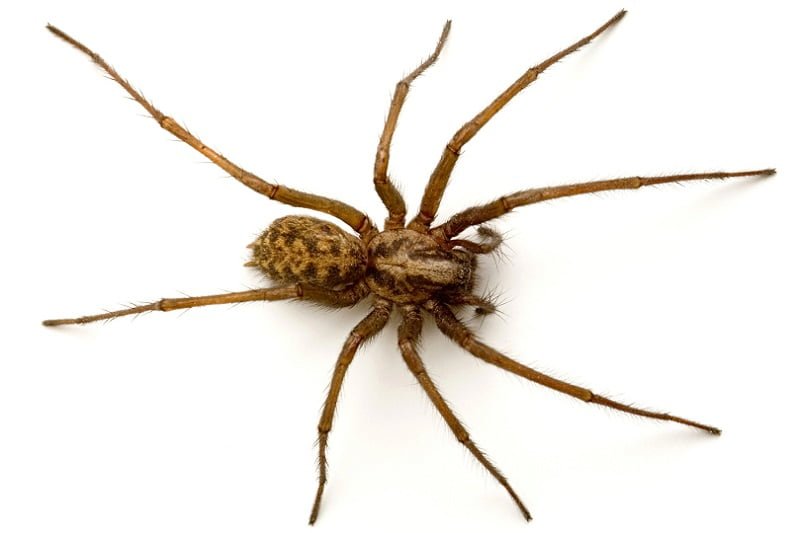 Hobo spiders are perhaps the most prominent spider species you’ll come across if you live in Oregon or anywhere else in the Pacific Northwest. They’re often mistaken for the brown recluse spider, another type of spider that has a notorious reputation due to its capability to inflict a bite that causes necrotic lesions. Hobo spiders were initially thought to have the same necrotic toxin in their venom, which explains why they are among the most feared arachnids in Oregon (next to the brown recluse and black widow).

Hobo spiders in Oregon are often mistaken for the deadly brown recluse spider.

First off, I’d like to set the record straight—there are NO brown recluse spiders in Oregon. A lot of people think there are, since most of us Oregonians have heard or read stories of someone seeing or having been bitten by a brown recluse. However, the fact remains that the range of this infamous spider is nowhere close to the borders of Oregon. Brown recluse spiders prefer warm and arid habitats and are only found in the South Central and Midwestern states. Confirmed sightings of the species in Oregon are extremely rare and could have been the result of brown recluses accidentally being transported in cargo or vehicles. Still, the very few that make their way into the Pacific Northwest will never be able to establish a population due to our climate conditions that are unfavorable to the brown recluse.

The map below shows the geographical range of the brown recluse spider, which is halfway across the United States from Oregon.

This other map below shows the geographical range of the hobo spider (in red) which includes the state of Oregon.

At this point, I hope I have made one thing clear—you need not worry about encountering brown recluse spiders in Oregon. You previous fears of coming across one in the Pacific Northwest remain validated, however, as hobo spiders are often mistaken for the brown recluse spider.

Even an experienced arachnologist (a person who specializes in the study of spiders and other arachnids) won’t find it easy to distinguish a hobo from a brown recluse at a quick glance. Like other spider species, both the hobo and brown recluse have several variations in their appearance and unless you use a magnifier, you will easily mistake one for the other.

Both the hobo spider and the brown recluse spider are predominantly brown in color, but one stark difference that will help you tell them apart is their markings. A brown recluse has a distinguishing violin-shaped marking on its back, which is why it also goes by the name, fiddle-back spider.  A hobo spider, on the other hand, will have distinct brownish yellow markings on its abdomen.

As mentioned earlier, you won’t find the brown recluse anywhere in the Pacific Northwest, so let’s just learn more about the hobo spider which you’re likely to encounter in your home in Oregon.

Known to arachnologists by their Latin name Eratigena agrestis (formerly Tegenaria agrestis), hobo spiders are a type of funnel-web spiders native to Europe. They were introduced via ships sailing to the United States in the 1930s and have established and even displaced native spider species in at least six states including Oregon.

Hobo spiders range in color from light to medium brown, with darker markings along the center of their backs down to either side of their bodies. Females have larger bodies measuring around 11-14 mm in length while males grow no larger than 11 mm. Their legs are solid brown in color and display no markings whatsoever. Up close, you will notice they have eight eyes clustered on their heads and arranged in two rows.

Hobo spiders can be found in almost any environment where there are holes, cracks or crevices which can support tunnel formation. Hobo spiders are poor climbers, which explains why you’ll rarely find them above ground level. Inside homes, they frequent dark, moist areas and are most often found in basements, garages, window wells and crawl spaces. Hobo spiders may also be found beneath rocks and among woodpiles outside.

Hobo spiders belong to the family Agelenidae, a group of spiders known for their funnel-like web construction. Funnel webs built by hobo spiders usually open at both ends, with one end expanding outward into a broad, slightly curved sheet. An escape tunnel is usually built in the back of the web, leading to a deep crack that serves as a protected area. These complex horizontal layers of entangled silk threads that comprise funnel webs actually serve three purposes—as mating grounds and nests, as detection devices, and as traps for potential prey.

Hobo spiders feed on various insects and may also consume smaller spiders and other arachnids like mites and ticks. Prey that comes into contact with the web trigger vibrations that alert the spider. After attacking their prey, hobo spiders will consume their meal within the narrow end of their funnel-shaped webs.

Now that you’ve gotten yourself acquainted with the most prolific spider species in Oregon, let’s get some answers to frequently asked questions about hobo spiders.

The simple answer to this question is YES. Just like any spider species, the hobo spider will use its fangs to defend itself when provoked or threatened.  However, hobo spiders are not considered an aggressive species and would much rather run and hide rather than attack and bite. They’re reclusive by nature, preferring to stay within their funnel-shaped webs awaiting for prey.

In general, the risk of a bite from a hobo spider is very small. Bites often happen when humans do not realize they are encroaching upon one. Male hobo spiders are also responsible for more bites than female hobo spiders because their wandering habit during mating season could bring them into contact with humans.

Bites from hobo spiders had been considered dangerous up to just about five years ago. Early studies of the hobo spider venom reported it to be a medical threat that would result to necrotic lesions. However, subsequent studies over the past 30 years refuted this as there had been no actual evidence that proved hobo spiders bites were dangerous to humans. On the contrary, most bite victims only reported local swelling and pain comparable to a bee sting.

The Center for Disease Control & Prevention (CDC) struck the hobo spider off its list of dangerous spiders in 2017 and now only lists two venomous spiders for North America—the brown recluse and the black widow.

At what time of the year should I be on the lookout for hobo spiders?

Hobo spider activity in your home usually increased in the late summer and early fall when males will wander into houses in search of a mate. This usually happens between June to October, with peak activity around the months of August and September. Crevices in bricks and dark areas are ideal nesting spots so it’s not unusual to find hobo spider webs in less disturbed areas of your home around this time.

Will I need professional pest control for hobo spiders?

It really depends on the population of hobo spiders that have found their way into your home and property. Many residents in Beaverton and the surrounding cities in Oregon call to ask how they should deal with spider issues in their home. The best advice I give them is to place some sticky spider traps or glue boards in their garage, basement and every other area where they suspect hobo spiders nesting or foraging. This DIY remedy actually serves two purposes:

It is always advisable to contact an organic spider pest control expert if you continue noticing a large number of spiders in and around your home or property. The presence of spiders can be an indication of yet another underlying pest problem. You see, spiders tend to build webs in places where they are likely to find food which, in most cases, would be other pest insects like ants, moths, mosquitoes or cockroaches.

Ant & Garden Organic Pest Control in Beaverton, OR offers 100% organic pest control treatments for all types of house and garden pests including spiders, ants, moths, and rodents, among many others. Give us a call today so we can help you put an end to your spider problem or any other pest issue you may have. We are committed to helping residents in Beaverton and the rest of the Portland metro area keep their home clean, safe and pest-free all year round!

You may also want to check out or other article on Common Spiders in Western Oregon.