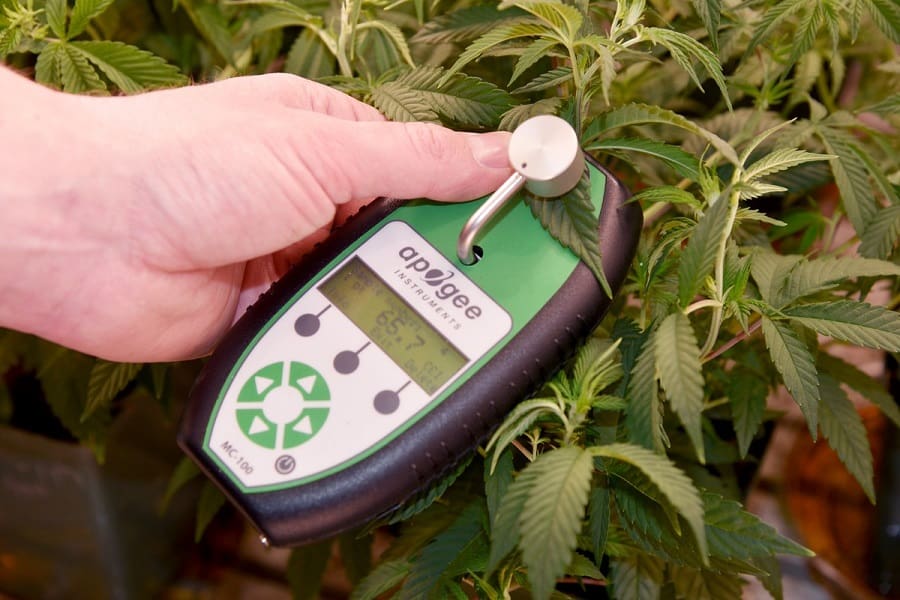 VPD is short for vapor pressure deficit, a measure of the combination of temperature and relative humidity which is vital in achieving absolute peak performance from a plant. VPD isn’t something new—it has been known for quite some time but took a back seat in the agro-horticulture arena because large-scale operations depended more on natural climate conditions. Only with the recent advent of greenhouses and grow rooms has it become possible for cannabis growers and hobbyists to actually control environmental conditions with more precision by making practical use of VPD.

The importance of Vapor Pressure Deficit in cannabis culture

Often, cannabis growers who cultivate their plants in greenhouses or indoor grow tents and rooms with artificial lighting take into account parameters such as temperature and relative humidity (RH) to maximize plant growth and bloom. These factors affect different plant processes such as transpiration and nutrient uptake which enable them to obtain abundant harvests with top quality flowers. However, there is this one other parameter which deserves equal attention for a more robust and disease-free harvest—VPD.

If VPD is too low, peak growth rates are not achieved and problems like mold or root rot can become an issue. If VPD is too high, the plant stomata will close in an attempt to limit transpiration, which can result in issues like tip burn and leaf curl. VPD can be directly calculated from the temperature and relative humidity (RH) of both the plant and the grow room.

Achieving the right VPD parameters involves establishing a correct relationship between temperature and relative moisture in a cannabis grow. This helps increase plant activity, thereby improving their growth and showing their full potential during the flowering phase. The ideal would be to adjust both parameters (temperature and humidity) to get the best possible VPD value, so that the development of plants will be optimal.

Achieving success in cannabis culture is all about offering the best conditions for the development of your cannabis plants. There are specific temperature ranges, humidity levels and VPD values recommended for successful cannabis cultivation. You will find them in the chart below. (VPD values are given in hectopascals or hPa.)

In this chart, you’ll find a range of temperatures on the left and relative humidity levels at the top. The rest of the figures you see are VPD values which are color coded to show you how to maximize the development of cannabis plants during their growth stage.

The brown zone shows you optimal values of VPD, in which it would be ideal to maintain the environment of your cannabis grow. The white zones on either side of the brown zone shows acceptable values in which plants should not experience any problems with their normal growth. However, the light blue and dark blue areas show values in which your plants will be very far from hitting their full potential, since the relation between temperature and moisture is not optimal.

With relatively high values of VPD (between 5 and 12), plants tend to open their stomata and release a considerable amount of water vapor into the environment. This increase in transpiration results in an increase in the plant’s photosynthetic activity, which will need more nutrients and will improve its overall growth, both during growth and bloom. The best range is between 7.5 and 10.5, which we have marked in brown. However, we must be careful that VPD is not too high (dark blue zone) since the plant would close its stomata to avoid releasing too much water vapor to the environment, which would result in fast dehydration due to excessive transpiration.

On the other hand, if VPD is too low (light blue zone), the plant will also close its stomata for not releasing more water into the atmosphere. In this case, it would be already saturated because it has reached the maximum water retention capacity in a specific temperature. In this way, reducing transpiration will also reduce photosynthesis, which has a direct impact on the plant’s development and yield.

There are also other risks unrelated to growth, such as mold, mildew, and insects that come with dangerously high or low VPD levels. If the air is too humid, your cannabis plants become susceptible to an environment where mold and mildew thrive. If the air is too dry, your grow room becomes an ideal environment for insects like spider mites, which enjoy arid conditions.

High VPD generally corresponds to a stressed plant during its growth stage because it becomes more difficult for the crop to manage water transpiration, nutrient uptake, and low relative humidity. When cannabis is growing, it needs a humid environment so it does not have to protect its water supply. It becomes an entirely different story, however, when cannabis plants enter the flowering stage.

Once cannabis begins flowering, water content isn’t as critical as it was during the growth stage. However, managing pathogens becomes the bigger issue. For this reason, having a higher VPD during flowering is preferable as it helps prevent the growth and spread of mold, mildew, and other disease-causing microbes. That is why it is better to move cannabis plants to a drier environment or adjust temperature, relative humidity and VPD values in your grow room at this stage.

While a VPD range of 7.5 to 10.5 hPa is commonly known as ideal in the vegetative or growth stage, a VPD range of 10 to 15 hPa is generally recommended during the flowering stage. You will also want to keep the temperatures at around 25°C and relative humidity below 55–65% to avoid bud-rot during flowering. Consider doing CO₂ supplementation during the flowering stage so you can easily run both higher temperatures and humidity levels safely.

While the chart above provides you with ideal scenarios for optimum cannabis culture, you may want to know how to calculate the vapor pressure deficit in your cannabis grow space. Well, you just have to know the temperature and relative humidity inside and as a cannabis grower or hobbyist, I’m sure you already have an infrared thermometer gun and a relative humidity monitor to measure and keep track of these essential parameters. In addition to these, you’ll also need to know the saturated vapor pressure (SVP) values for a given temperature, which are listed below.

To calculate the vapor pressure deficit (VPD), use the following formula:

Considering that values of the table are given in hectopascals, this gives us a result of 9.45 hPa, a value located in the brown area of the chart which is perfect for cannabis plant development.

VPD helps you identify the correct range of temperature and humidity to aim for in your cannabis grow space. VPD also controls plant transpiration rates, stomata opening, CO2 and nutrient uptake, and even plant stress.